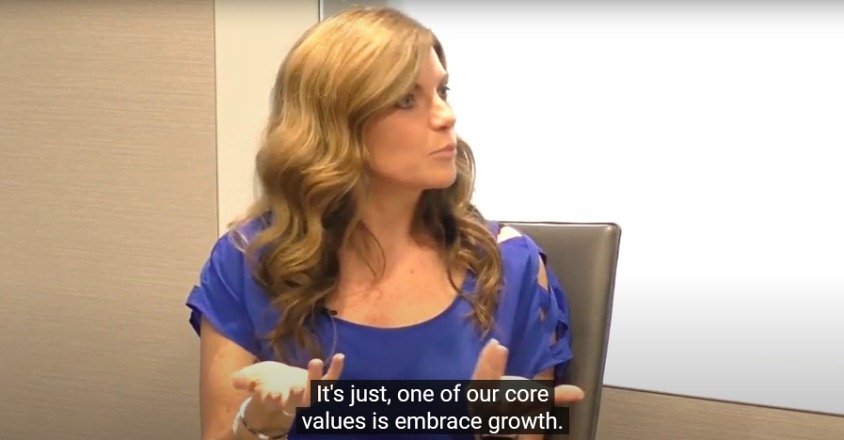 Today’s video is with Ginger Jones who owns Jones Therapy Services, which is a fascinating business with a fascinating backstory. In this video, Ginger shares her experience of being a lifelong learner to develop her leadership style and growth of her company.

DONNA: So, Ginger, I just want to talk to you a little bit. Thanks so much for being here.

DONNA: But I wanted to find out a little bit about what made you start Jones Therapy Service?

GINGER: Sure. Yeah, so I was, both my parents were deaf, so growing up I was raised by

GINGER: Two parents that had a hearing loss. Early on I knew that I wanted to work with children with special needs and specifically with hearing loss. And so, I’m very blessed in that way that I had a path set out in front of me and it was an easy one to follow. Moved home after graduate school and started working at the Vanderbilt Bill Wilkerson Center. Which was really cool for me because my grandparents had started that and my dad was one of the first students there.

GINGER: Yeah, it was great and was really, I was 23, and I was having this, what I just call a full circle moment of doing what I’d want to do my whole life and I was a big girl, and I had a big girl job.

DONNA: Look at me.

GINGER: Look at me, yeah. I was doing all the things and, I loved it there. I had great, I had great opportunities to learn and to just really hone my skills as a clinician there and about six and a half years into it just, kind of started to feel like I actually liked things to move quicker. You know, just change. I think that that’s kind of something that a lot of entrepreneurs really like is, when you work in a bigger organization, you know change and

GINGER: So that, I, at that point I mean I can’t I wish I could say that I had some formal business plan and this great marketing plan. I wasn’t that smart, I just thought that I could do something better. And so, I saved up some money and kinda made some plans in my head and, decided to start my own business.

DONNA: Wow, so how long did you think about that before you started your own business?

DONNA: I was going to say, it was weeks at least Right?

GINGER: I was, yeah,

DONNA: You decide to start your own business now you have nine locations now, nine years later

GINGER: Mmmhmmm, yeah, we really have grown our services here.

GINGER: Yes, yes, every year we’ve had growth. Some years it was really compressed and it was a lot of growth in one year. And then we would kinda take the next year and put the legs under the table so to speak.

GINGER: but yeah, we’ve grown every year. And now we offer a wide variety of services. We started out with just speech-language services, and now we do behavior therapy, and occupational, and physical and feeding therapy as well.

DONNA: How did that all happen?

GINGER: It was very organic. A lot of it was just me making mistakes and then figuring out that I needed to change something. And, I heard the founder of Papa John’s Pizza one time say, “When you get better, you get bigger”. And so, I thought, that’s probably the best explanation is that I always, consider myself a life-long learner. And so, I was always trying to make myself better as a leader. Trying to make myself better as a business person and that trickled down, because you know what leadership is doing then your team does. And so,

GINGER: Because there was that cumulative effect of everyone always trying to be better, and always being okay with learning. That’s just part of the culture. It was really the thing that couldn’t help but get bigger. And I embrace growth, you know, I think that if you, you don’t have to be growing just because your good.

GINGER: There’s plenty of great companies that don’t grow. But I embrace that. And I think that’s probably think that more of the entrepreneurial side of me, is that I like that newness and that creation thing. And I didn’t know that I really had that until I got in the middle of it.

DONNA: With more of the growth, what kind of challenges have you had?

DONNA: Cause the bigger you get, the more challenges there are.

GINGER: For sure, for sure. I think one is systems are constantly changing. And, so a lot of times I’ll say what worked when we had 100 patients, didn’t work when we had 500, and it certainly didn’t work when we had thousands. And so, that can sometimes be exhausting, and so I think again, it sends a message in your organization. It’s just, one of our core values is embrace growth. Then also, as you know, just having more people means that you just have to learn to work with a bunch of different personalities.

GINGER: And so, that’s been challenging for me. When we had 10, 12 people, probably, everybody was just like me. And then there’s, you know, pros and cons to that, but as you grow, that just can’t be the case. You have to kinda learn how to work with a bunch of different personalities and how to mold your leadership style to different people.

DONNA: So if you were going to give somebody, who was thinking about, I’m pretty good where I am, but I’m thinking about taking that next step maybe opening another location.

DONNA: Or maybe growing my business by double, you know, so that’s my goal for the next three years for example, what kind of advice would you give them?

GINGER: I would, first of all, say, what’s the why? You know, if the why is more revenue, or more margin, or more profit, I just think that that’s. When things get really really tough, it’s…that’s not going to be enough to get you through. And so, if the why is because it feels, it’s on your heart and it’s your passion and it’s your purpose then no matter what comes your way you will be able to, you’ll have the grit to get through that. So, that’s the first question.